Access to resources is controlled with an access control list (ACL). An ACL consists of one or more rules where permissions are applied to the controlled resource. The ACL itself defines what permission is granted. Attaching the ACL to a role defines who has the permission. Any groups and users that belong to the role either directly or through groups have the permissions granted in the ACL.

Magnolia allows you to define different ACLs for each role. With this method you can assign exact access credentials. 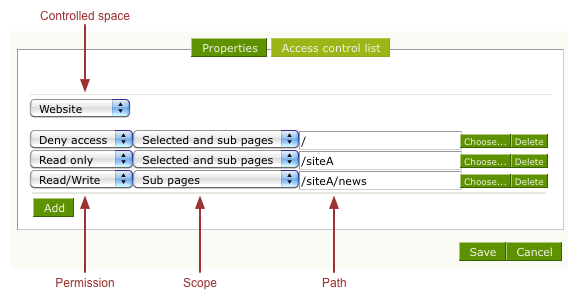 For example, the following ACL attached to the Editor role gives editors permission to edit news pages under siteA/news.

In order to understand the pattern length criterion it helps to look at how Magnolia stores the ACL rules internally. Each rule is translated into one or more regular expression patterns. The choices you see in the scope dropdown in AdminCentral are translated as follows.

The Selected node option is a special case available only in controlled spaces such as Config. You can use this rule in other spaces by defining it manually with the dollar sign $.

Example: You have a page /news/sports and you want to grant sports editors the ability to edit that page, its properties and its subpages, but don't want them deleting the page. Create the following ACL rules in the Website controlled space:

A uniform resource indicator (URI) designates a method to access a resource, for example http://, and the specific resource to be accessed, for example /siteA/news. Magnolia allows you to set permissions on URIs through ACLs. URI ACL is typically used to deny "anonymous" and non-authenticated users access to the author instance.

For a public site, at minimum access to AdminCentral should be restricted by denying access to "/.magnolia*"

The Enterprise Edition supports multiple sites in a single Magnolia instance. You can control cross-site access through either or a combination of:

In order for users to access AdminCentral they need at least read-only access to the website root node /. In the tree views (not only in the website tree) users will only see the hierarchy and nodes according to their own permissions.

The AdminCentral menu is defined in the configuration of the adminInterface module at /modules/adminInterface/config/menu. The user will only see the menu entries to which he has at least readonly access.

In the website view the user can select the appropriate template for each page from a dropdown.

The options available in this dropdown are filtered according to the user's permissions. A template assigned to a page is visible to all users but only authorized users can assign it.

In the Standard Templating Kit (STK), the roles that can assign a particular template are defined in Templating Kit > Site Configuration > templates/availability/templates/<template name>/roles.

Note that templates can be defined in all modules. Module specific template permissions can be set by defining an ACL rule that grants access to the Config repository at /modules/<module name>/templates.