Commands are custom actions executed at pre-defined trigger points. Magnolia uses commands to send email, flush cache, take backups, import and export data and for many other tasks. Commands can perform duties within the system or connect to external resources.

You can write your own custom commands and execute them either on demand or scheduled. For example, you could execute the standard Magnolia sendMail command when a page is activated. This way you can send an email notification to a user who needs to review the page.

Commands consist of a command definition and Java business logic. Since the business logic is written in Java, you can perform basically any task that Java allows.

A command definition makes the command available to the system. To create a definition:

You don't necessarily need to create a new module if you just want to add a command. You can put the command definition into any existing module and copy the class file to WEB-INF/classes under the Magnolia webapp. However, it is easier to maintain your own classes, templates and configuration when you organize them in a module rather than leaving them scattered around.

Commands are organized into catalogs. A catalog is an optional intermediate folder in the configuration hierarchy. It resides under the commands folder and contains commands. For example, the adminInterface module has two command catalogs: default and website. 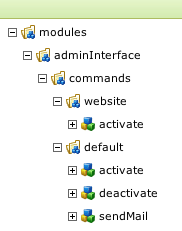 The advantage of using a catalog is that you can have identically named commands. You might want two activate commands – one for pages and another for documents. To call a command that resides in a catalog, use the catalog name followed by a hyphen, then the command name. For example, you would distinguish the two activate commands by calling one with website-activate and the other with default-activate.

Catalog names have to be unique across the system. Magnolia will not merge commands with same name from various catalogs. It will load commands only from one of them. Since the adminInterface module has a default catalog, the name is already taken. If you created a default catalog the names would conflict and the system would not load your command. Choose a catalog name that characterizes its commands, such as "messaging" for commands that send emails and notifications. See Querying for catalogs and commands how to check for currently used names.

Querying for existing catalogs and commands

To query for existing commands:

Note that catalog is an optional level. Commands can reside directly under the commands folder too.

A command is typically implemented as a Java class. The class needs to extend the MgnlCommand class.

Commands can be grouped and executed as a chain. When you call the parent node its child commands are executed one-by-one in the node order from top down.

The activate command in the website catalog is an example of this. It is a group of three commands that are executed when a user activates a content node such as web page: 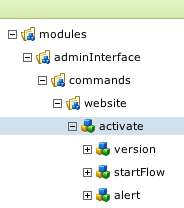 You can use the Scheduler module to execute commands at a given time. You could for example activate a press release on a certain day, take a weekly backup of content, or syncronize a taxonomy of terms with an external source.

Example job: Deactivating a campaign every Friday at midnight. 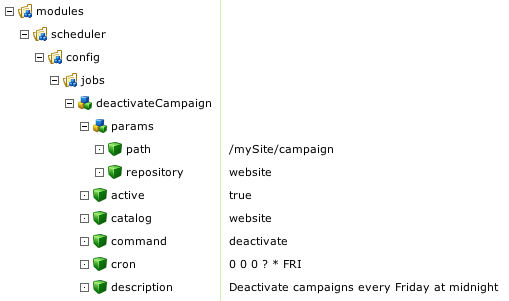 Executing a command in the Groovy console

Use the Groovy console to execute command business logic manually, in ad hoc fashion. This is a quick way to test a custom command before you compile it as a Java class.

This example activates the page /demo-project/about/history. You can test it by making a small change on the history page, executing the Groovy commands, and viewing the modified history page on the public instance.

The execute() method is passed a Magnolia context instance ctx which is an implicit object the console always puts at your disposal.

Executing a command as a Groovy script

You can also save a command as a Groovy script. This is more comfortable than writing and executing one line at a time in the console. Groovy scripts can be run from the dialog used to edit them.

You can write your own custom commands and execute them either on demand or scheduled. For example, you could execute the standard Magnolia sendMail command when a page is activated. This way you can send an email notification to a user who needs to review the page.