The prototype configurations are possibly the most important in the STK. They are the hub of many other configurations; the glue that holds everything together and makes it fall into the right place. [1]

The site definition includes the default templates, theme and varitations. The only difference between the enterprise and community editions is the multisite feature which is available only to enterprise edition users.

Community Edition supports one site. You can find the configuration in Templating Kit > Site Configuration. 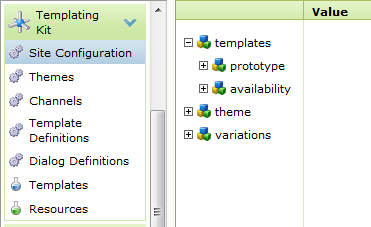 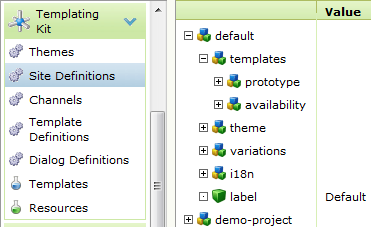 Both editions have full i18n support. The addition of the i18n node in the EE configuration relates to multisite i18n support. 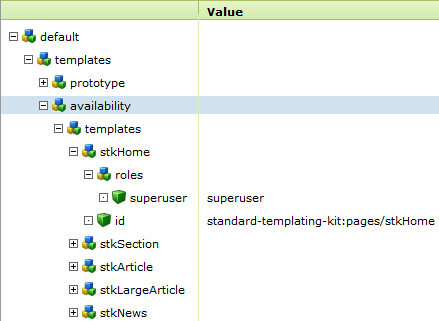 4.5.9+ If you have a custom template availability class, replace occurences of template.getName() with template.getId(). Since Magnolia 4.5.9, the id property is exposed to TemplateConfig . Prior to 4.5.9 the name of the template node was exposed instead.

Template availability, in the sense that not all templates are available at all page levels, is also controlled by the category assigned to the individual templates in the concrete template definitions. For more information on the site hierarchy see Categories and subcategories.

The /theme node assigns the default pop theme to the site definition using the name property. A theme defines a site's look and feel, as well as its JavaScript functionality. Themes are configured in Templating Kit > Themes. A variation can use its own theme. pop is the default theme used by all sites unless another is assigned in an EE site definition or in in a variation. 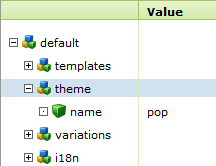 As the name suggests, a variation is a varied form of the prototype. In the demo sites it is used to reformat content suitable for output on a smartphone, but is not limited to this. You can for example configure variations for tablet, web-TV, PDF formats, or specific output for groups of logged in users. See Channels for more information.

The /variations node contains the configurations for all variations of the site. For each variation you can: 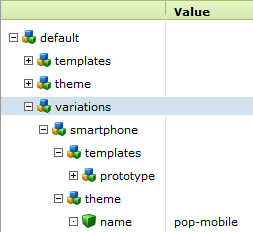 The smartphone variation is discussed in detail on the Mobile page.

Magnolia offers internationalization support on three levels: content, system and authoring. You can view the i18n configurations in Configuration > /server/i18n.

In the EE the content server configuration relies on the ETKI18nContentSupport Java class that provides additional i18n support for multiple sites. This class delegates to the i18n support configured in a site definition.

In Templating Kit > Site Definitions the /default/i18n node defines the fall-back internationalization settings for the default site definition. Other site definitions can modify these settings allowing specific sites to have different settings. Within the /i18n node the following are set: 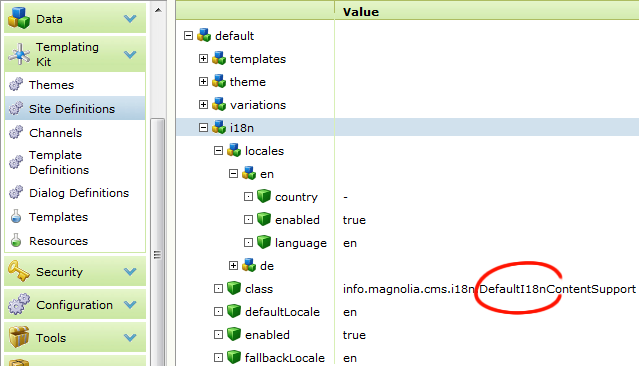 Throughout the system languages are indicated by a two letter identifier, en (English) and de (German) in the example here.

In the CE, content authoring is configured in Configuration > /server/i18n/content. This configuration sets the /fallbackLocale and individual language locales in the same way as the EE. DefaultI18nContentSupport is the same Java class used by the EE in the site configuration. The defaultLocale property is unnecessary as multiple sites are not possible. By default the enabled property is set to false and should be changed to true to enable multilingual content entry in the editing interface.

Other than those indicated above, i18n server configurations are the same in both editions.

In the editing interface editors can select the relevant language for content editing in a dropdown in the top bar. Language indicators are also included in all dialogs next to the field label.

For more information see i18n and l10n and Multilanguage structure.