Magnolia's Standard Templating Kit (STK) is a best-practice framework for creating websites. It builds upon the generic templating mechanism. STK ships with configurable, production-ready templates for common use cases such as articles, news, events, sitemaps and image galleries, while letting developers and creative designers build completely custom sites. Templates can be written in JSP and Freemarker or another templating language.

The STK bundle is included in the Enterprise Edition bundle and Community Edition bundle and is typically already installed. Go to Magnolia Store > Installed modules in AdminCentral to check. To install the module individually, see the general module installation instructions.

After installation you will see new menu items Data, Forums and Templating Kit in AdminCentral. 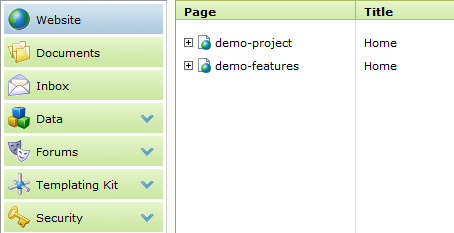 The STK bundle ships with a static HTML prototype. You can find it in the prototype folder inside the ZIP file. It is a collection of STK page templates delivered as stand-alone HTML files. Referenced CSS and images are also included. The static prototype is aimed at creative teams who don't know how Magnolia works or have no particular desire to learn it. It allows designers to work on positioning, typography and color outside of Magnolia, using their own tools, in their own environment.

You can (and should) use the HTML prototype to develop your CSS. The advantages of this approach include:

Whenever we enhance the STK, we add new HTML to the static prototype first. The static HTML is then tested on all supported browsers. Once the HTML has been perfected, templates are created.