The Magnolia Campaign Publisher module allows you to define campaigns consisting of pages, assets and other resources within Magnolia. The module provides a status for each campaign and a way to review each included resource. You can publish the campaign as a whole instead of having to publish each resource separately.

See Installing a module on how to install the bundle using JARs or Maven dependencies.

Magnolia Campaign Publisher module is not bundled with Magnolia. You can download it from our Nexus repository or include it in your custom webapp by adding following Maven dependency to your pom.

The module is configured under Configuration > /modules/campaign-publisher.

To create, rename or delete a campaign:

Later, when the campaign is published and no longer needed, you can delete or archive it. An archived campaign is hidden from the view.

You can also create a campaign on the fly. Start by selecting the content you wish to add to the campaign, for example in the Pages app.

You can select multiple pieces of content at the same time. Hold down the Cmd or Ctrl key and click to select the items you want to add. 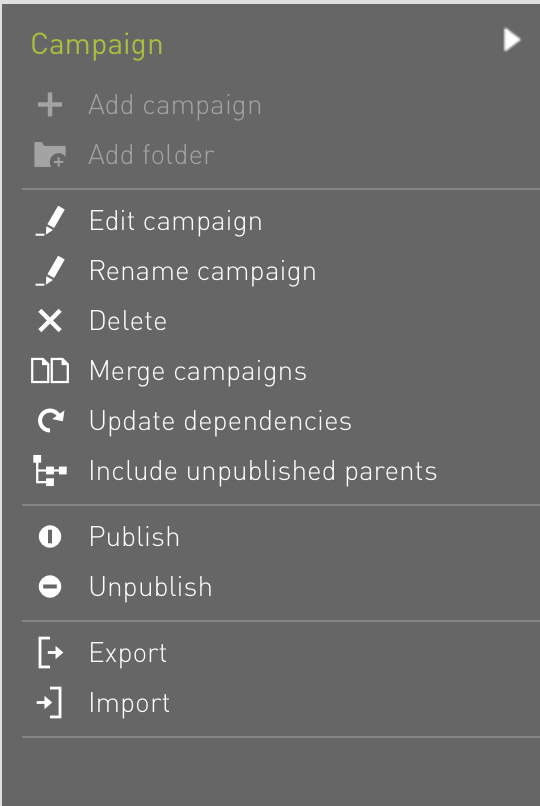 Various actions listed above are available to those who wish to manage campaigns.

It is possible to merge multiple campaigns together using "Merge campaigns" action. Just select campaigns that need to be merged and click on the action. Duplicates will be removed automatically.

If your campaign includes referenced content and you are not sure that this content is up to date, click on "Update dependencies" to refresh all the dependent content. Warning will be shown should such action result in removal of no longer referenced content.

Sometimes, specially when creating a lot of new content or performing big restructuring of the site, it is possible that some of the content from the campaign can't be published because it's parent content is not published either. Use "Include unpublished content" action to automatically include all such parent items, should there be any, in the campaign to ensure successful publishing of all content in correct location. When doing so, please ensure that the included parent pages are reviewed and publishable before triggering publishing to ensure only desired content is made public.

Use "Delete" action to remove the campaign. Upon deletion, content in the campaign (pages, assets and other resources) will NOT be deleted.

Use "Publish" action to trigger publishing of all content in the campaign. Upon publishing, all content that can be published will be made public. Depending on your configuration, workflow might be triggered instead of direct publishing of the content. 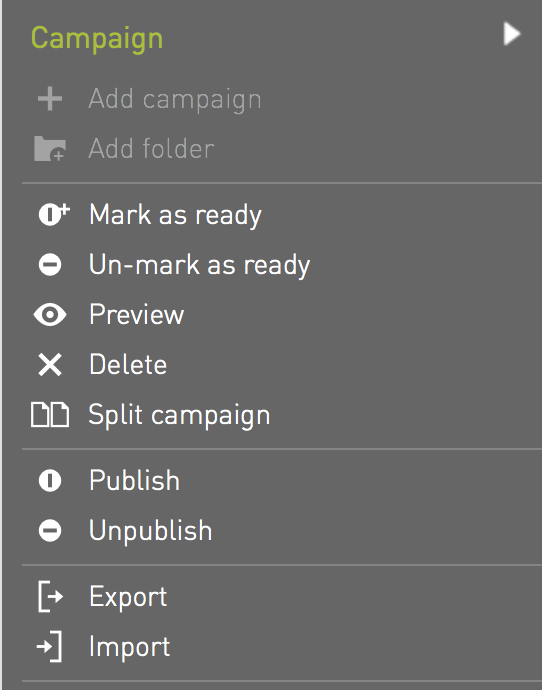 Use "Preview" action to preview content of the campaign. When used for Pages, action will open current page in the preview app. When used for any other content, such content will be opened in the edit dialog of the app appropriate for previewed content.

Use "Review" action to mark content in the campaign as reviewed. The default, "unreviewed" (red) status will be changed to "reviewed" (green) upon clicking on the action for all selected content. Should the content be modified after the review, status will be automatically modified by Magnolia to "modified" (amber). Upon marking all content in the campaign as reviewed, whole campaign is marked as reviewed. If campaign contains modified or unreviewed content, it's status is always unreviewed.

Content can be part of multiple campaigns at the same time.

To add action for content inclusion in your custom app, simply add following to list of actions.