Rendering is the process of merging templates with content. It generates a meaningful stream of HTML that can be displayed in a browser. This is the step where content becomes visible to the end user in page context.

Rendering is performed by the RenderingEngine . The engine generates HTML output based on templates. The RenderingFilter that is part of the filter chain submits a content node to the engine.

Since submission of content is handled through a filter, an independent servlet or Java application can also submit content to the Magnolia rendering engine (Freemarker only). You can trigger the rendering of any content node from Java code or template script. This is useful if you want to render a node that is not part of the page structure.

On submission of content to the engine, the following process kicks off: 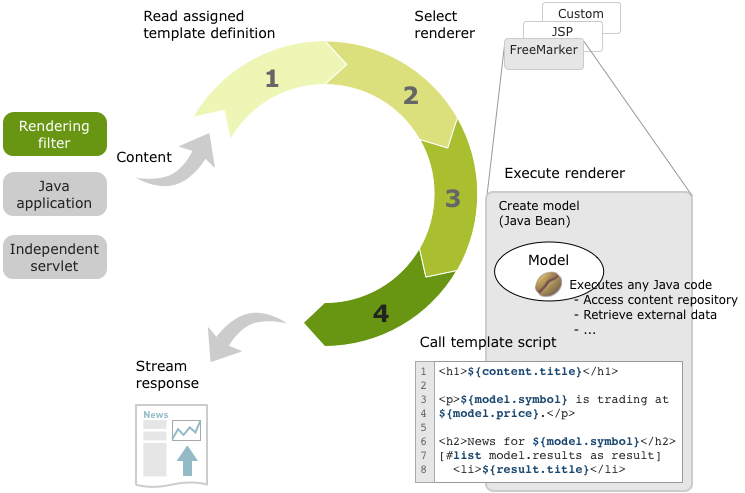 A renderer is a Java class library that understands a particular templating language and produces text output. For example,  FreemarkerRenderer understands Freemarker tags and  JspRenderer JSP taglibs and produces output in HTML, XML, RTF, Java source code and a few other formats. A renderer is not an end-user application but rather something programmers can embed into their products. You can register a renderer in your own module configuration under a renderers folder.

Any renderer that knows how to call a Java method can theoretically be used to render authoring UI components. Velocity (similar to Freemarker but lighter) and ColdFusion are examples of popular templating languages that have been implemented successfully.

Rendering of page content happens in a top-to-bottom fashion. Rendered HTML is sent to the output stream as soon as it gets rendered.

When a page template script calls an area, and the area in turn calls a component, the rendering engine follows referenced scripts down the rabbit hole until it finds the last script in the sequence. It then moves to the next element on the page, starting where it left off.

As a consequence, you cannot redirect in a component model as the request was already committed when the rendering of the page started. Any operations changing the HTTP response headers (redirects, setting cookies...) can only be executed in the page template's model.

Sometimes components need to be able to execute logic before page rendering starts. This is necessary for operations such as forwarding and redirecting.

Early execution is implemented using  ModelExecutionFilter . This filter comes before page rendering in the Magnolia filter chain. A special request parameter mgnlModelExecutionUUID contains the UUID of the component that should be executed. The component model can decide if it wants to output something special or continue with rendering normally. If the model implements  EarlyExecutionAware interface, then the executeEarly method is called. Otherwise the normal execute method is called.

If the component model decides to continue normally, the already-executed model and its actionResult are used instead of executing the model again.

You can render a component directly by URL. This is useful for example to render Magnolia content in a external system. The URL pattern follows the storage path in the JCR. For example, the first promo component on the demo-project page resides at path /demo-project/promos/0 in the JCR.

To render the component directly, request it using the path in the URL. 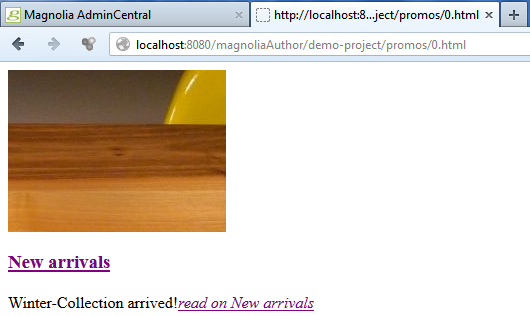 Freemarker only. Direct area rendering does not work in JSP because JspServlet uses its own output provider.

Direct area rendering allows you to render any area that has a node in the JCR. This is useful for example to render Magnolia content in a external system. To render an area, insert the mgnlArea selector into the URL after the page name but before the .html extension. Set the value to the area name. 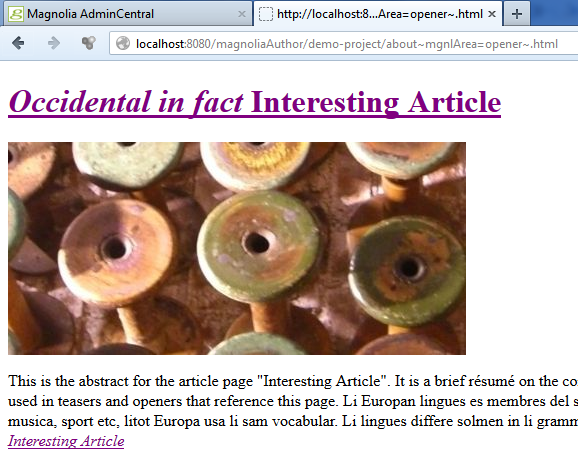 You can populate the  RenderingModel  with request parameters. This is useful for reacting to URL information. For example, identify a visitor who comes from an email campaign and execute custom rendering logic for them. Here is an example of parameter that tells you the visitor clicked a Campaign Monitor email campaign.

Enabling the population of request parameters

5.0.2+ You can enable the population of request parameters globally for all templates or for a specific template.

For a specific template definition, overriding the global setting:

Processing the parameter in a model class

In your model class, implement a setSomeParameter(String) method. The method will be called with the attribute value as the parameter.

Populating the rendering model with request attributes impacts performance. The rendering calculation takes about 8% longer when population is enabled. Enable it only for templates where it is really needed.