Access to resources is controlled by roles set up in the Security app. 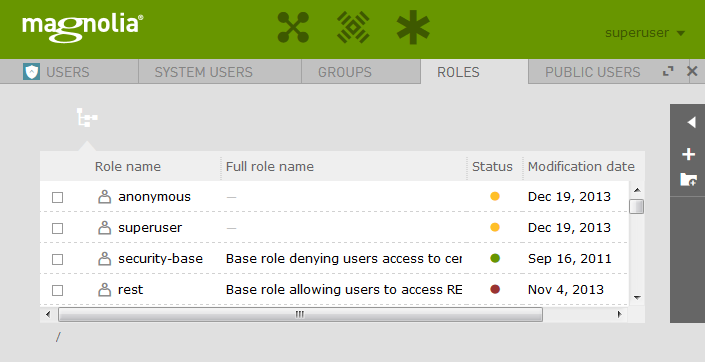 A role is a function a user performs in the management of a Magnolia website. It reflects the actions and activities assigned to or required or expected of a user. For example, the role Editor is responsible for day-to-day editing of content displayed on the site. Permissions granted to the editor role allow users in this role to edit content and submit it for review. The role Publisher on the other hand is tasked with reviewing content and publishing it from the authoring instance to public instances. Roles have ACLs and Web access permissions.

Magnolia allows you to define different ACLs for each role. With this method you can assign exact access credentials.

An ACL consists of one or more rules where permissions are applied to the controlled resource. The ACL itself defines what permission is granted. Attaching the ACL to a role defines who has the permission. Any groups and users that belong to the role either directly or through groups have the permissions granted in the ACL.

On the Web access tab you can set permissions for site URLs. This allows you to control what parts of the site a role can access. Typically you need to at least deny the anonymous role access to AdminCentral.

On a public instance, deny the anonymous role access to AdminCentral and any members only sections of the site.

The Selected node option is a special case available only in controlled spaces such as Config. You can use this rule in other spaces by defining it manually with the dollar sign $.

Example: You have a page /news/sports and you want to grant sports editors the ability to edit that page, its properties and its subpages, but don't want them deleting the page. Create the following ACL rules in the Website controlled workspace:

In order for users to access Magnolia via the app launcher they need at least Get & Post permissions to the root node (/*) in the Web access tab. This gives the user permission to access the system and launch non-restricted apps, but they have no access to content. Note that in a multisite environment the ACLs are site aware and the root node is then referenced with * (without leading slash).