My first REST request and REST API show you how to make requests to Magnolia's REST API. This document is about the REST module.

Magnolia's REST Web service allows you to manipulate content through a Web API. You can create, read, update and delete nodes in the JCR. The nodes can be pages, components, contacts or anything else that is stored in a named workspace. You can also execute commands to activate, export and import content.

The REST service is similar to the Data module in Magnolia 4.5 which pulled data from other sources into Magnolia. However, REST works with the push principle where your application communicates with a Magnolia REST endpoint and exchanges a representation of a resource such as an XML of a page. REST is useful for connection tasks. Use REST to push product data from a third party system into Magnolia and let editors enrich it in a Magnolia app, for example.

This module installs the endpoints of the REST API: node, property and command.

The REST Integration module installs the integration part of REST. The module:

The REST Tools module extends the RestDispatcherServlet with a custom, API-aware servlet that can read API annotations from all available REST endpoints. The servlet enables the endpoints in the Swagger API explorer. If you write your own endpoint you need to add annotations in the code yourself.

Not installed by default.

Setting the API base path

The Swagger API explorer tool searches for the API at a path set in /modules/rest-tools/config/apiBasepath. The default value is http://localhost:8080/.rest. The value for this property must match the following pattern:

When using one of Magnolias preconfigured bundles running on localhost, set the property to http://localhost:8080/magnoliaAuthor/.rest.

Set the path to where REST services reside on your system. If you run the standard Magnolia bundle and work on the author instance, set the path to http://localhost:8080/magnoliaAuthor/.rest.

After setting the base path, restart Magnolia.

Swagger is in Dev > REST Tools. 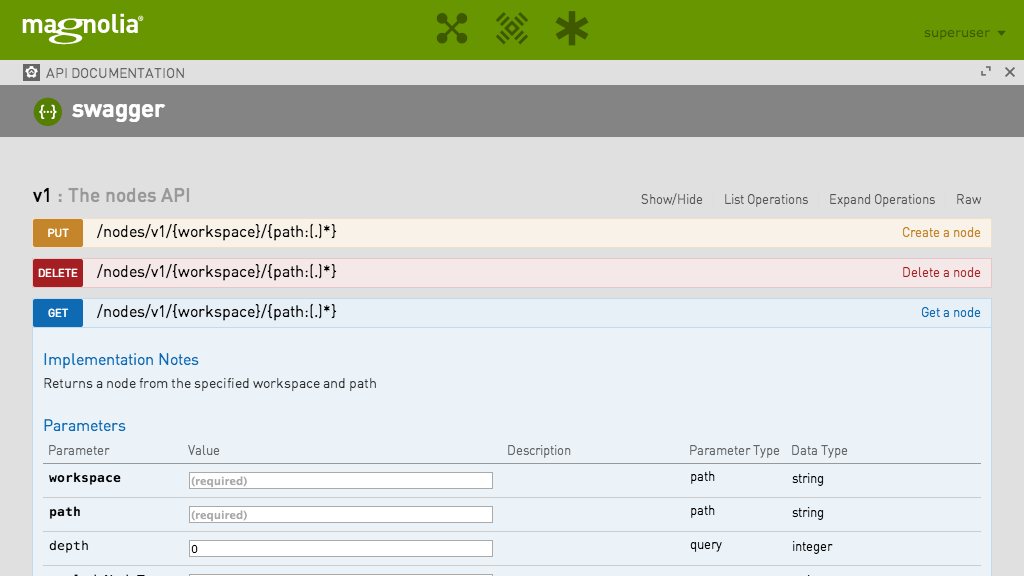 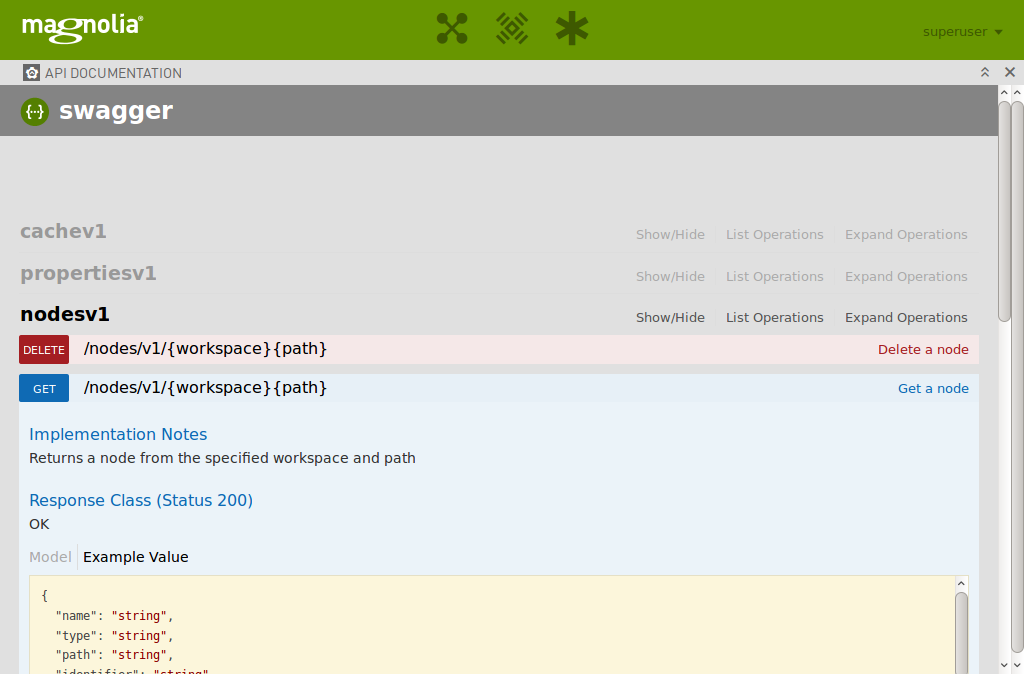 The REST module installs a rest role which has the permission to issue requests to the nodes and properties endpoints by default.

The superuser account has the rest role by default so you can use superuser to test your requests. However, for production use you should create a dedicated account for REST. The anonymous account is specifically denied access to the REST endpoints.

Commands are custom actions executed at pre-defined trigger points. Magnolia uses commands to activate content, send email, flush the cache, take backups, import and export data, and to do many other tasks. Commands can perform duties within the system or connect to external resources.

You can make sweeping changes with commands, such as bypassing approval and deleting the whole site. Commands are therefore subject to a special security restrictions.

To enable the use of commands through REST: