Skip to end of metadata Go to start of metadata
In this page we explain how to configure RabbitMQ with Magnolia to publish content and synchronize Magnolia instances.

In the scenario below: 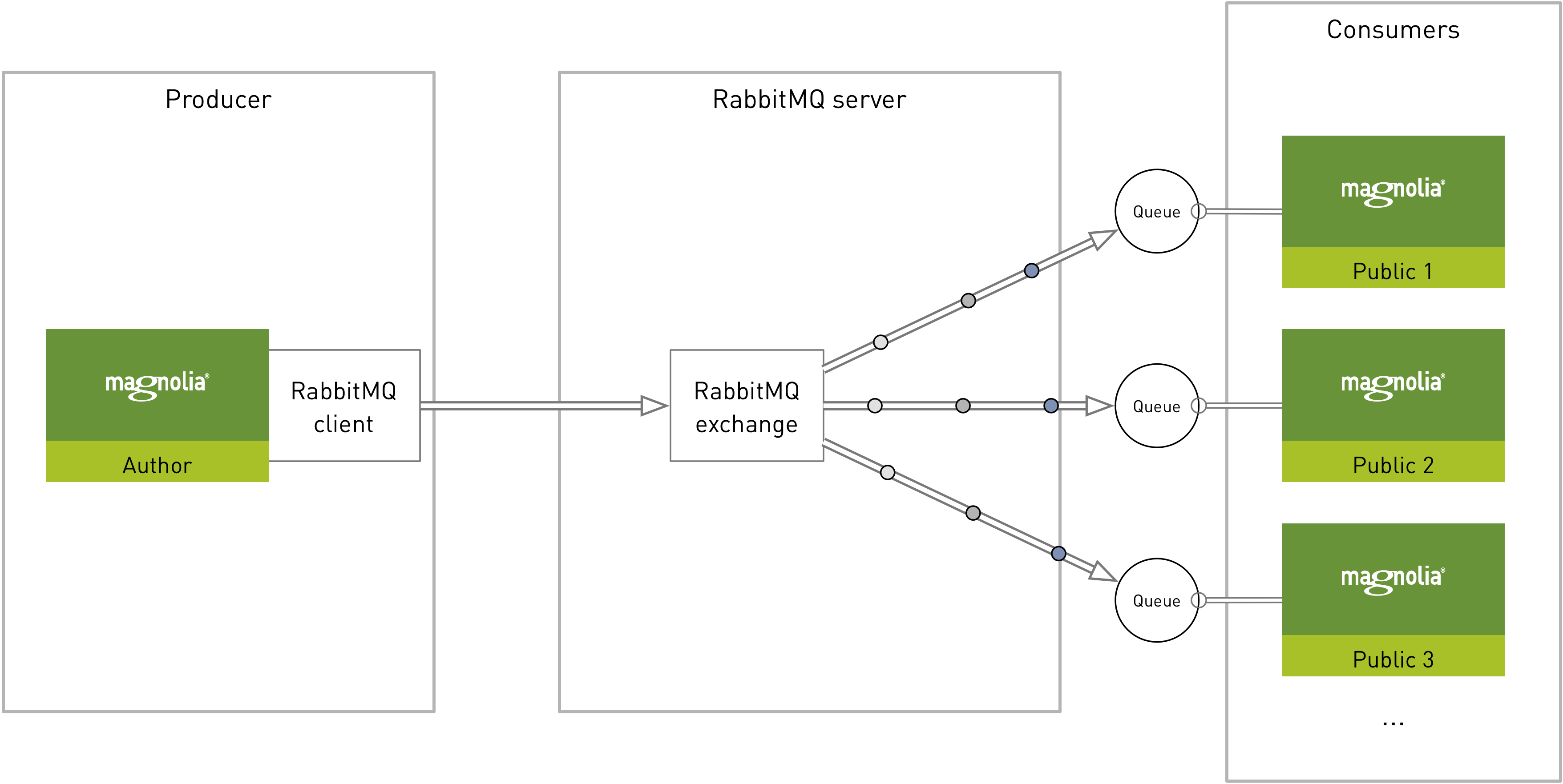 RabbitMQ exchanges and consumers are configured in the connector module. The exchange is configured on the author or producing instance and the consumer on the public or receiving instance.

The exchange is the kind of router that the queues connect to. The producer instance pushes messages to the exchange and the exchange then decides what to do with them.

You must confugre the exchange configuration on the author or producing instance.

The example exchange configuration is in /modules/rabbitmq-connector/rabbitmq-client/sampleClient/exchangeConfig.

You can test the connection in the RabbitMQ console.

When the client is enabled, the exchanges and queues should be visible in the RabbitMQ console. You can test this at  http://localhost:5672 , for example.

Make sure the consumer is disabled on the author instance or it will re-consume what it had just tried to publish. 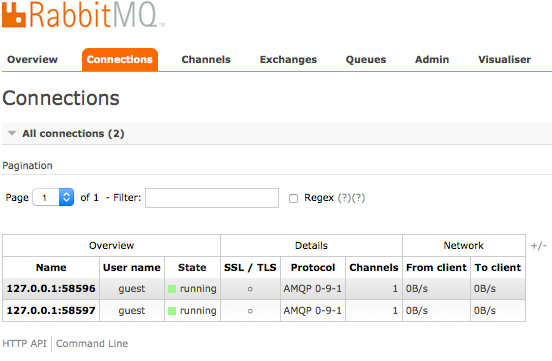 You should be able to see the queue in Queues.

You should be able to see the exchange in Exchanges.

You can select commands/catalogs to match your purpose for using RabbitMQ and use them in your apps. You can also customize them to suit your needs.

The commands are configured in /modules/activation/commands/<catalog name>.

You can use the RabbitMQ commands in your apps, for example, to sync your content with another environment after an activation.

Example: Content syncing in the Pages app in /modules/pages/commands/website.

To test the new commands activate content and then open the RabbitMQ console. You should see messages in the queue (fan1) . 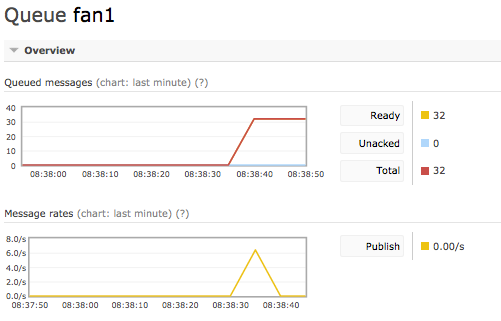 Consuming messages on a public instance is called activation or publication. On other instances, for example another author instance in a staging environment, it is called syncing.

When the messages have successfully reached the queue:

Make sure the sampleClient configuration is enabled on both instances.

The example consumer definition is in /modules/rabbitmq-connector/rabbitmq-client/sampleClient/consumerDefinitions.

Each activation is prefixed with a BOA (Beginning Of Activation) message and postfixed with a EOA (End Of Activation) message. When the consumer receives a message on a public instance, the message is stamped with the identity of the receiver and send back to the ack queue. When the author receives the message, the author knows exactly if the message started consuming the activation. In addition, identifying the activation in queue with BOA and EOA allow identification of TX inside the the queue. 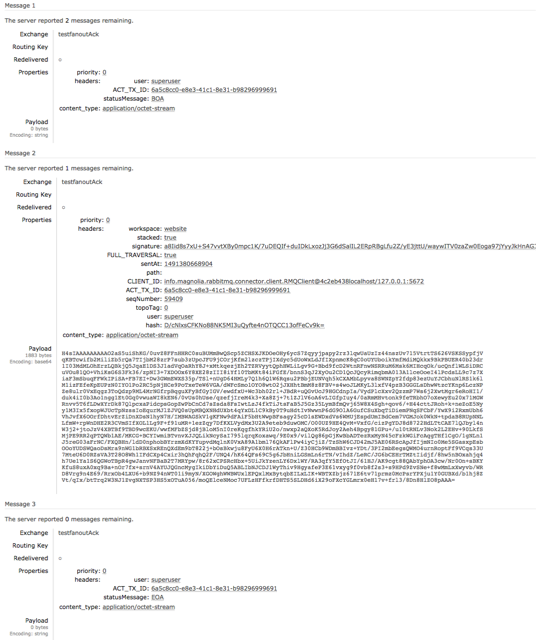 When the activation consumer is configured, the receiving instance should start consuming messages.

Open the RabbitMQ console to verify that the specific queue (fan1) is being emptied and that the nodes appear on the receiving instance. 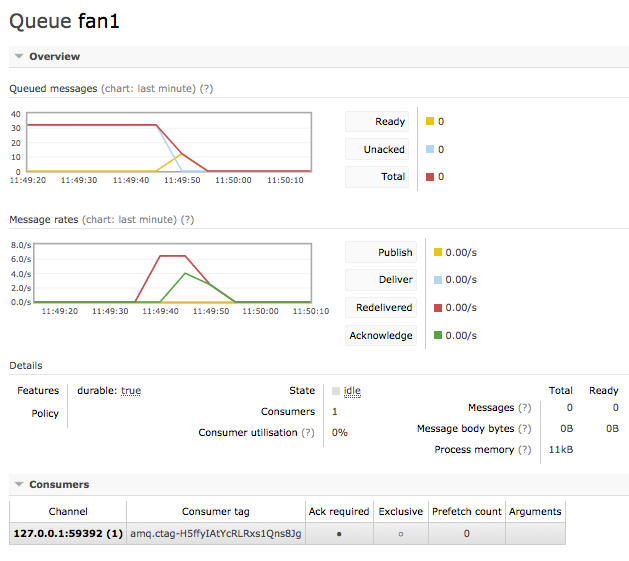 While transactions are possible with RabbitMQ, they are complicated and slow down publishing. Ideally, the same activation message would be received by all instances at the same time, but this is technically very difficult to achieve and does not add much advantage in any event.

What is important however is that a Magnolia instance knows when a node is out of sync with another node, and that the load balancer knows which node is late. This is achieved by recording the time stamp and latest message state.

Whenever a message has been consumed and the content activated on the instance, the instance stores the message id (which is a long that is incremented) and the date the message was activated.

This information is either sent to the load balancer or made available over a servlet. The goal is that the load balancer knows which instance is behind and by how much. In the example above the load balancer controlling tool knows that Public 1 and Public 2 are synced. It can decide to wait for Public 3 to sync, and if this does not happen, to alert the systems administrator or trigger the creation of a new instance.

The Magnolia RabbitMQ implementation introduces the concepts of SyncState and SyncStore to achieve content synchronicity between public instances.

The mechanism is basically a counter that is incremented when each activation message is sent. The counter is sent in the message header. When the receiving instance gets the message, the instance increments its own activation counter. This means that two public instances which have different SyncStates are out of sync until the counters once again have the same number.

The load balancer calls the REST service of the public nodes and in this way knows which public node is most up to date and which one is out of sync.

The loadbalancer also knows when the public instances are getting activated. SyncStates are persisted to the JCR.

The Dynamically Weighted Least Connections Algorithm on your load balancer guarantees synchronicity and ensures that public instances do not get too far out of sync. See Least-Connection Algorithm based on variable weight for multimedia transmission for more.

The load balancer plays a big role in this. During a very big and long activation process, the load balancer can decide to redirect the traffic to the instances which have the highest and most equal ids. This increases traffic on these instances, which in turn slows down the activation process. Instances with initial low and unequal ids now have a higher chance of reaching the same state as the instances under load.

The algorithm creates a kind of "auto-damping" system that slows down instances by giving them more traffic, while speeding up the activation process on the others . Having the load balancer actively take the activation mechanism into consideration stabilizes the whole public node group.

Next: Add monitoring to your RabbitMQ configuration