This tutorial explains how to access Magnolia content from a client-side application. We use Magnolia's built-in REST API and a single-page AngularJS application.

We use the classic cars from the My first content app tutorial as sample content. The cars are typical structured content: each car has the same content type and same fields. You can publish it to a website or consume it from a client-side application like we do in this tutorial. With the Magnolia Delivery endpoint API you can access any Magnolia workspace. 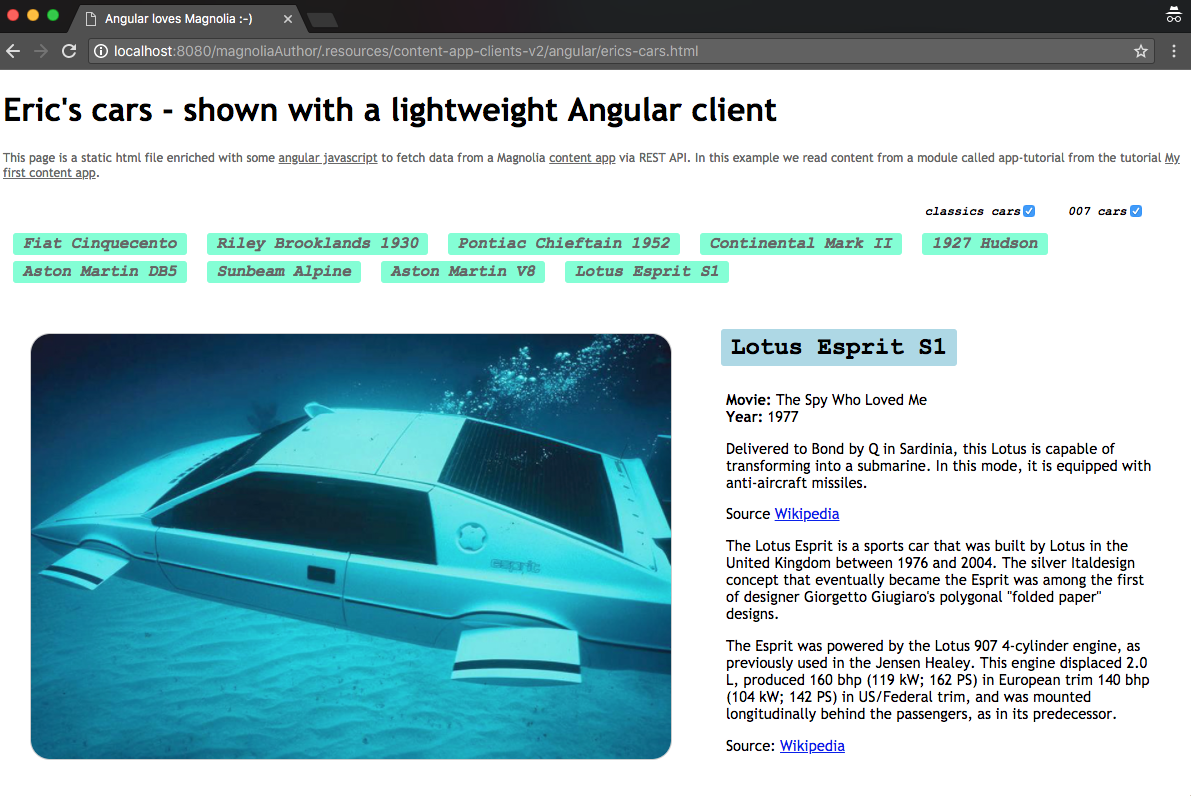 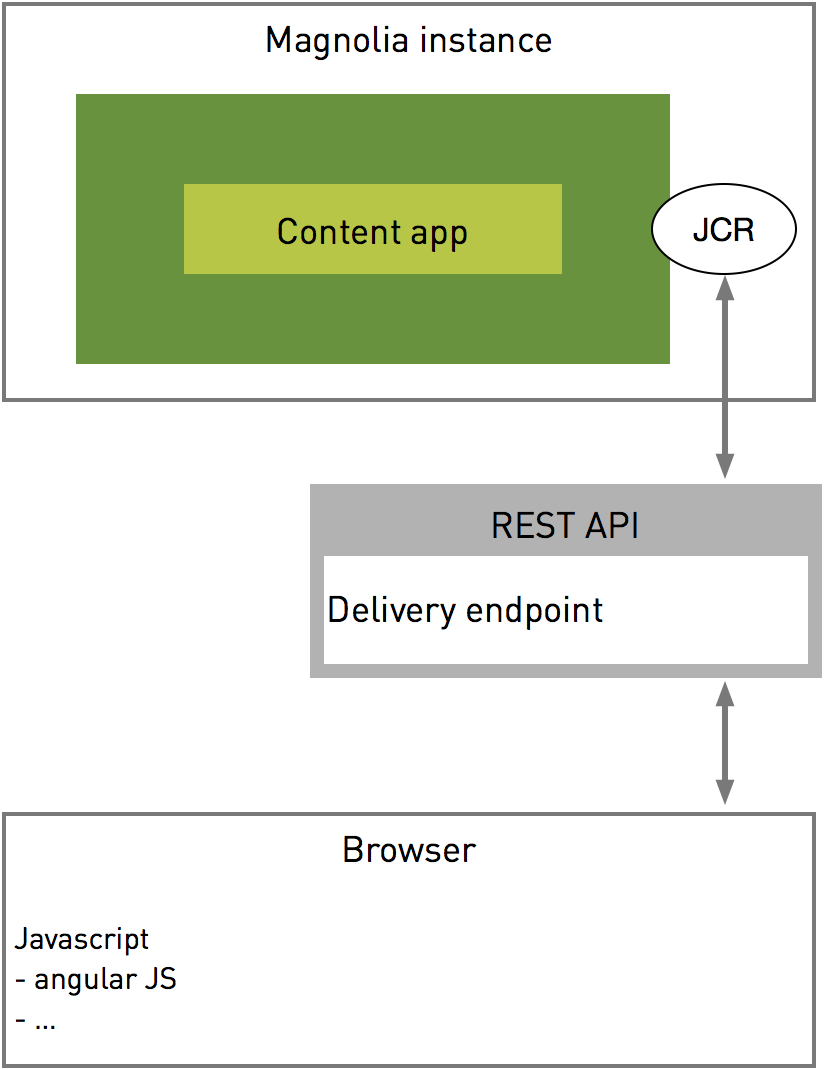 For this tutorial you need a Magnolia bundle with:

To install the bundle together with the app, we recommend using Magnolia CLI jumpstart.

Once installed, the directory where you exectued the jumpstart command looks similar to this:

Remember the light-modules folder. You will add files there later on.

Give Magnolia some time to finish the installation during the first start.

Then open a browser, open the URL http://localhost:8080/magnoliaAuthor and login with user superuser / password superuser.

If you aim to fetch JCR content as JSON, analyze the JCR content using the JCR Browser app to understand all its details.

This is the products workspace displayed in the Tools>JCR browser app:

Look at the image property. It stores an asset ID, a reference to an asset stored on the dam workspace.

Configure a delivery endpoint in a light module

To get the content from the app-tutorial as JSON, we will configure a delivery endpoint in a light module. In this example, we name the light module content-app-clients-v2.

Within your light-modules folder, create this structure:

Before developping the Angular app, it is good practice to check if the API returns the JSON you expect and will be required by the Angular app. Check this using a browser.

We want to test the requests:

You must be logged in to test the requests on the magnoliaAuthor webapp. Open a browser, request just http://localhost:8080/magnoliaAuthor/ and log in with superuser as the user name and password.

In a productive environment you request JSON from the public instance. In this tutorial we request the JSON from the magnoliaPublic webapp. Do not log in so that you test as the anonymous user.

Click here to see the JSON of a single car

Lines 8-13: Note that the reference to the asset (which is stored in the dam workspace) has been resolved.

Click here to see the JSON of all the cars

REST APIs are a powerful feature but they may also turn into a security risk. This is why it is important you understand how Magnolia handles security for REST.

We strongly recommend you read and understand the page REST security.

For this tutorial, note the following points.

There are two levels of control when REST requests are issued on the delivery API:

Both web and JCR access must be granted. In Magnolia it is granted using Roles with access control lists that are assigned to users and groups.

When you tested the requests above, you used:

These users have very different security settings. While superuser typically has a lot of permissions, anonymous has only limited access for both web access and JCR security. Requests made using the anonymous user on magnoliaPublic only worked because:

In a production environment:

AngularJS is a Web application framework popular among front-end developers. In this tutorial, we use an AngularJS app to access and render content from the Products app. We assume you know enough JavaScript to follow along.

We will create an Angular app that provides:

We will create an ngApp  with two controllers: 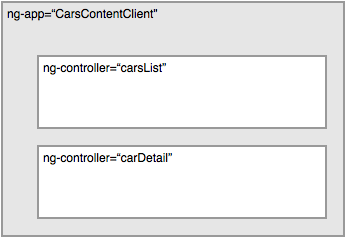 Now create a folder called angular with the files app.js, erics-cars.html and style.css in the light module, to create this structure:

In a real use case you would serve the Angular app not from Magnolia, but rather from a static webserver like Apache and most probably on a different (sub)domain.

Start creating the Angular app in erics-cars.html. Add an ng-app directive to the body element which wraps the two controllers:

Request the file in the browser to make sure that Magnolia serves a static file. Use a dummy parameter ?foo=bar also in the request URL. It ensures we bypass cache on both server and client side.

Next, configure the Angular app in app.js:

lightmodules/content-app-clients-v2/angular/app.js (fragment)
Now you have created the app and defined some constants to use later on.

To render a car's details we want a  $scope  object of the carDetail controller with the following properties:

Add a component named globalData. Both controllers use it. It has a property productPath that is set by one controller and read by the other controller.

Add a component named utils. It provides some useful methods that both controllers can use. We use the function replaceAll in the carsList controller.

The third helper to add is the sanitize filter. Remember that the description property of the content item contains encoded HTML. By default, Angular refuses to render JSON content that contains (HTML) markup. The sanitize filter makes sure that the (encoded) HTML is rendered properly as HTML. 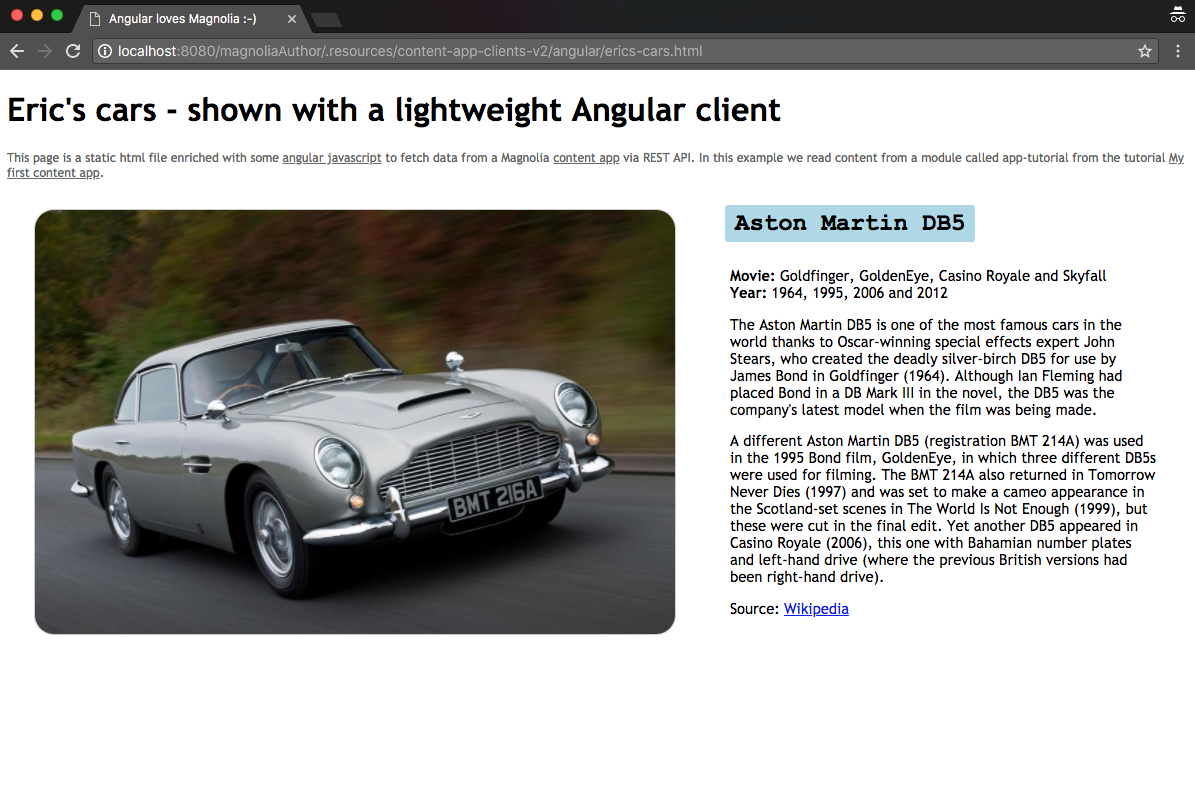 The carsList controller renders a list of clickable span elements that contain car titles. The list can be filtered with checkboxes using the parent folders classics and 007 as pseudo-categories.

Add this HTML in erics-cars.html:

lightmodules/content-app-clients-v2/angular/erics-cars.html (fragment)
The $scope of this controller has the following properties:

Here is the JavaScript code:

Get the completed files

The files in their final form are available in the Magnolia Git repository.

Clone the repository to get the complete file structure. Use a terminal, go to your light modules folder and clone:

Where to add the AngularJS app

You can use or host the AngularJS app anywhere:

If you want to run the AngularJS app on a different host – a host which has a different address than the Magnolia server which provides the REST API – you run into the same-origin policy problem. To overcome this problem, some use specific Apache settings, see StackOverflow.

An elegant solution to solve the same-origin policy without changing Apache configuration is the Magnolia Add HTTP Headers filter.