Tasks make collaboration better. Tasks are better than messages when you work together with others. Tasks have a clear status and an assignee. You can go to the Tasks app to claim a task for yourself and start work on it.

Do not use tasks if you don't have any human activity in your workflow. They are great for humans but unnecessary for operations that only involve the system itself. 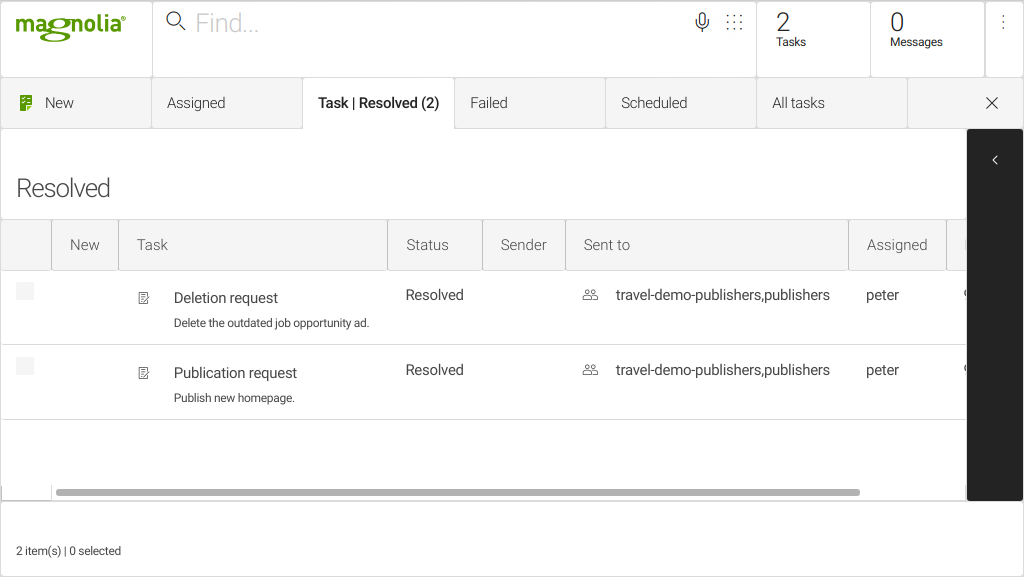 A task is an object that you create using the TasksManager. You can send the task to a list of users or to a list of groups. The recipient can assign the task to himself. Other recipients can see who owns the task and its status when they go to the Tasks app.

Be aware that by calling

the task will not be created in the workspace.

The content map is stored to JCR using OCM and allows storing any <String, Object> map where Object is a simple type. The data inside the content map is usually only used for displaying information in the Tasks app.

Magnolia uses info.magnolia.ui.admincentral.shellapp.pulse.task.action.ClaimTaskAction inside the Tasks app for this step.

using the info.magnolia.ui.admincentral.shellapp.pulse.task.action.ClaimTaskActionDefinition class but adds notifyPreviousAssignee , which is set to true by default and will trigger sending an i18n-able notification in the Tasks app to the previous assignee in the publication sequence that the task has been reclaimed by another user:

Magnolia uses info.magnolia.ui.admincentral.shellapp.pulse.task.action.ResolveTaskAction inside the Tasks app for this step. It allows you to define a decision inside the configuration which is mainly used for approving or rejecting a publication.

The TasksManager provides a method for archiving tasks. The method removes the task from the Tasks app. You can still retrieve an archived task later in case you want to re-open it or audit.

Changes to task status can be tracked by registering a TaskEventHandler to the system event bus.

A task presenter is started when a user opens a task to see its details. The presenter builds the form and action bar which are displayed to the user in the browser. Magnolia provides a DefaultTaskDetailPresenter. See Task view for its functionality.

Most likely the task data you want to display in the Tasks app can be rendered with the DefaultTaskDetailPresenter. But in case the default presenter is not sufficient you can implement your own presenter and have it render whatever view is needed.

To implement a custom presenter, extend or use TaskUiDefinition instead of TaskDefinition and add a presenterClass property with a custom implementation of the TaskDetailPresenter interface to the configuration.