jBPM6 allows you to execute processes defined using the BPMN 2.0 XML format. That means that you can use all the different jBPM6 tooling to model, execute, manage and monitor your business processes using the BPMN 2.0 format for specifying your executable business processes. Actually, the full BPMN 2.0 specification also includes details on how to represent things like choreographies and collaboration. The jBPM project however focuses on that part of the specification that can be used to specify executable processes.

Executable processes in BPMN consist of a different types of nodes being connected to each other using sequence flows. The BPMN 2.0 specification defines three main types of nodes:

jBPM6 does not implement all elements and attributes as defined in the BPMN 2.0 specification. We do however support a significant subset, including the most common node types that can be used inside executable processes.

Visual representation of a process

BPMN2 files are XML files. You can model them in a visual modeler.

Here is a visual representation of a simple process consisting only of start and end events and one executable task.

jBPM can execute any process that is described using the standard BPMN 2.0 XML format. You can use any modeler application that supports the format. As always with standardized formats and their implementations, there are shortcomings no matter which one you choose. At Magnolia we use the Eclipse BPMN2 modeler plugin. Feel free to add other recommendations as comments in this document.

Restart Magnolia when you add a new workflow process.

Workflow processes are launched using commands. As an example we have two commands defined inside the workflow command catalog.

The workflow property defines which workflow is launched. The property maps to the name of the registered process in the process registry.

Magnolia comes with two commands for launching workflows. Both commands can be configured in the class property of your command configuration.

While the publication process is launched by the PublicationWorkflowCommand the process itself will again launch a command for the actual publication. By default this is the activate command from the default catalog defined inside the Activation module or in case personalization is installed it uses the personalizationActivation command. The command is configurable.

You can define different processes to be launched based on sub paths of your node. So in case you want to handle the publication of some content inside your tree differently you can configure this inside your command definition, like this: 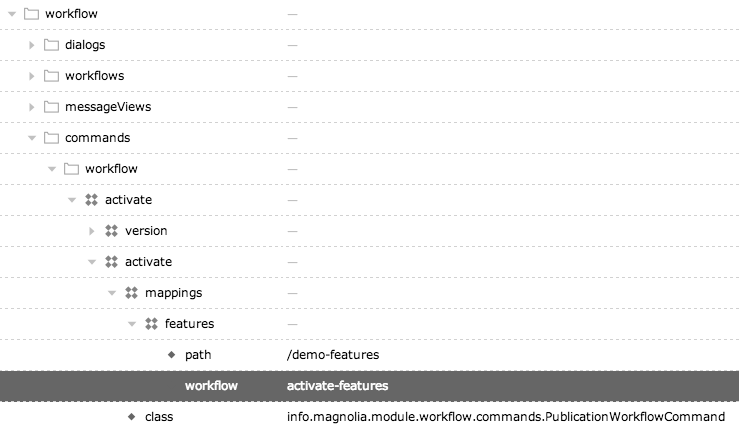 When configuring a workflow mapping create a new catalog inside your app. Otherwise the mapping is applicable for the publication of all content.

Modeling of a process is mostly about defining flows of executable tasks. However, it all boils down to working with data. Data can be passed as parameters into the process from the very beginning and has to carefully be mapped and manipulated from one task to another.

Use Magnolia's commands to launch a process. This allows you to pass parameters to the process using command context attributes consisting of the parameters passed to the following call:

Furthermore, you can consolidate parameters into a named map which you can reference from within jBPM. Add the parameterMapName property under the commands configuration:

Here's how you can reference the map in the BPMN2 modeler:

Please refer to the tutorial for a step-by-step explanation.

We have put together a step-by-step tutorial on how to create, load and launch custom process.